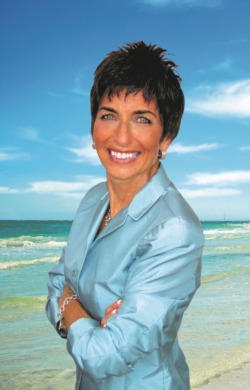 Known for her easy communication style, winning attitude and keen business sense, Judie Berger loves selling real estate and enjoys sharing her passion with her clients. She works hard to ensure that every real estate transaction, whether buying or selling a property, is a memorable and worry-free experience. A licensed REALTOR® since 1999, Judie specializes in luxury waterfront, island, and country club residences.

It was after vacationing in Sarasota in the early 90s that Judie and her family became captivated by the area’s beauty and decided to relocate here from the Philadelphia/Southern New Jersey area. She’s been selling real estate in the area ever since, and Judie’s success as a businesswoman in the sports industry has served her well in becoming one of the leading REALTORS® in Sarasota.

For 25 years, Judie was one of the world’s foremost designers and manufacturers of thoroughbred racing apparel and helped shape the image of many winning stables and jockeys, including Angel Cordero and Julie Krone. From racing silks to racetracks, Judie’s creative flair and marketing savvy was at the cornerstone of her business. She applies these same skills to real estate along with providing “Triple Crown” attention to her customers, which has resulted in a strong repeat and referral clientele. A multimillion dollar producer, Judie has won virtually every award for high achievers, including RealTrends “America’s Best Real Estate Agents” (in partnership with Zillow & Trulia) for the last three years, voted one of Sarasota Magazine’s Five Star “Best in Client Satisfaction” Real Estate Agents for the past thirteen years, Pulse of the City News Award for Excellence in Customer Service for the last three years, and Premier Sotheby’s International Realty’s Top Individual Agent Award. Judie is also an Accredited Buyer Representative (ABR) and Graduate of the REALTOR® Institute (GRI).

When she’s not helping people buy and sell homes, Judie’s free time is spent with her family and pets. As a mother of three daughters, she has been extremely invested in the local school system, volunteering and fundraising. She also enjoys boating, the beach, fitness training, the arts, antique hunting and youth sports, especially supporting her daughters’ rowing and soccer teams. Among volunteer positions held over the years, Judie served proudly for many years as Vice- President and Regatta Leader for the nationally acclaimed Sarasota Crew Youth Rowing Program.